LUCAS-Goodland broke a scoreless tie with five runs in the bottom of the fifth inning on their way to a 5-1 victory over Russell Sunday afternoon in the semifinals of the K-18 State Baseball Tournament at the Lucas Baseball Field.

Russell was the visiting team as the #2 seed out of the East against the West's Regional champion and they had scoring opportunities early in the game only to leave the bases loaded in the first inning and a runner stranded at third base in the second frame.

Mason Rohr who was the winning pitcher in Saturday's first round win over Scott City, got the start having just thrown 42 of his 105 allowed pitches.  Rohr was perfect for the first two and a third innings and then got out of a jam with one out and two runners on in the bottom of the third inning to keep the game scoreless.

Goodland's Zach Thorson matched Rohr's zeroes with solid pitching of his own, retiring Russell in order in the third and fifth innings.  In the bottom of the fifth, Rohr was nearing his pitch limit when he walked two of the first three batters he faced and was lifted in favor of Saturday's starting pitcher Wyatt Griffin.

Griffin did his best, but Goodland came up with key hits set up by a couple of stolen bases and before the frame was over, Goodland held a 5-0 advantage going to the sixth inning.  Russell responded with a tally in the top of the sixth on an RBI single by Jaxon Ross which scored Rohr who had reached on an error, but that was all the scoring allowed by relief pitcher Kacen Sederstrom who relieved Thorson when he reached his pitch limit.

Griffin retired Goodland in order in the bottom of the sixth but Sederstrom struck out the side in the top of the seventh to end the game and send Goodland to its first appearance in the State Championship game since they won their second and most recent title in 1985.

Rohr who threw 63 pitches before he had to exit took the loss for Russell (8-8) which will face Clay Center ABA in the third place game on Wednesday, July 27 at 3 p.m. in Lucas.  The game will be a rematch of the East Regional title game won by Clay Center ABA 10-2 on July 15 in Concordia.

Earlier Sunday, Phillipsburg advanced to its first title game since 2016 by outlasting Clay Center ABA 9-7 in eight innings.  Phillipsburg's  last championship was won in 2004, the second of back-to-back titles for that K-18 program.  The championship game is set for 5:30 p.m. on Wednesday following the third place contest. 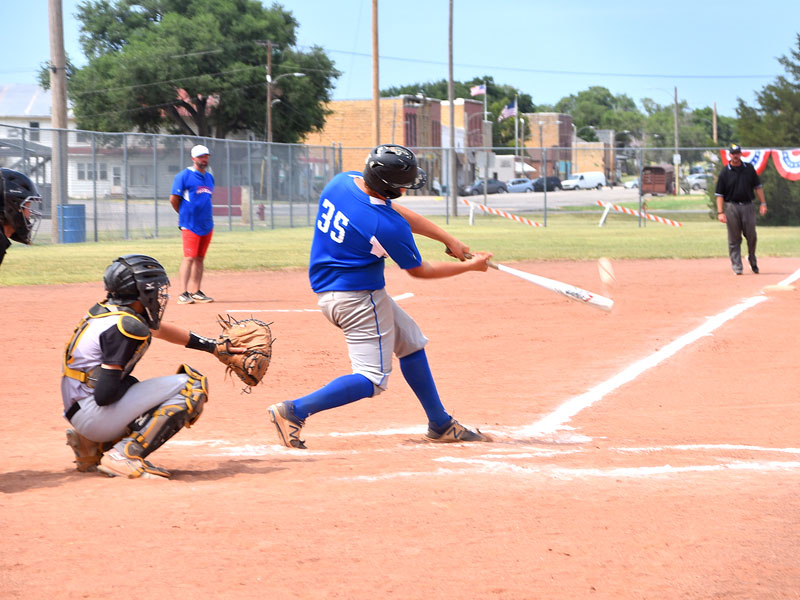